A downloadable game for Windows

Caveat: Unfortunately it's not really finished.

The base gameplay is working and it's playable and kinda enjoyable for a while.

Please read the instructions below since they're not really explained in the game:

Web Version playable here: http://www.impbox.net/ld43/ (however Undo is not available in the web version unfortunately)

Gameplay hugely inspired by one of my favourite board games Time Barons.

Goal: Sacrifice 100 souls to the Serpent Totem in your starting town to summon the Serpent God before you are overrun by invading colonists (represented by the red at the top of the world map). 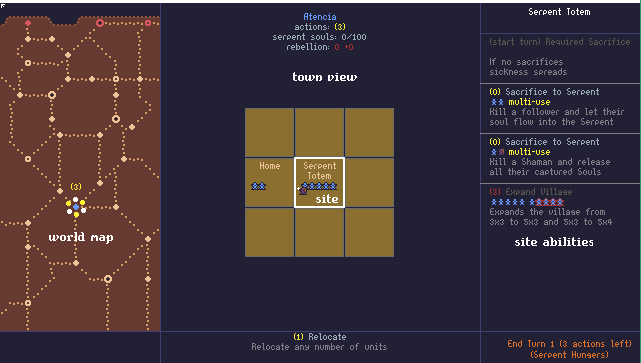 Each turn you get 3 actions per town (upgraded towns get 4 or 5 depending on the size), and 1 per army.

Spend your actions by activating "Site abilities", click on a site, then click on the ability on the right panel to activate it (you must meet the requirements, usually a number of followers (blue figures)).

Undo a move by right clicking.

Most Site's can only use one ability per turn, unless the ability is marked as "multi-use" in which case you can use it as many times as you like, provided you meet the requirements.

You can build new Buildings on empty sites with 3 followers, or 2 followers worked to death.

If you're out of space, you can Expand your town from the Serpent Totem or Village Square with 10 Followers and 3 actions, this will also grant an increase in Action income.

Activate Relocate to pick up and move units between any number of sites (or place on the world map adjacent to your town to make an army). You can hold down the button to suck up lots of units or drop lots of units. Once you're done, click the Relocate button again to finish. (This whole process only uses 1 action point, but use it wisely)

You can also use Shamans (purple figure) directly, click on one and it'll show a list of Shaman abilities, these work much the same as Site abilities, but they can also require a number of souls, a Shaman can gather souls by killing followers and the like, granting them more powers. If you have a Shaman gain many souls from killing, they can be later sacrificed to the Serpent God by sacrificing the Shaman at the Serpent Totem.

However, sacrificing increases Rebellion in the town, for every Rebellion over 5, a new Rebel (red figure) is spawned in the town, and rebellion will go down slightly. But each turn that ends with a Rebel in the town, the rebellion will increase by 1 per Rebel.
You can deal with Rebels by building a Temple and Re-educating them, or building a Barracks and training Soldiers (green figures), if a Soldier ends their turn on the same site as a Rebel, they will kill each other. Temples and Watchtowers can also help reduce Rebellion before Rebels are spawned.

Once you're out of useful actions, End the Turn in the bottom right.
However, the Serpent God requires at least one sacrifice per turn, if you fail to provide this, she will make your followers Sick (black figure) and you'll need to heal them. 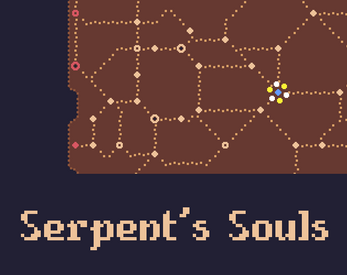