What ratio is this game screen made for? It cuts off the right side of the screen for me. Unplayable

Works for me on a 16:10 screen but it should work on anything.

Are you playing in fullscreen mode or in the frame?

Neither solve the bug for me. I'm on a 1440x900 resolution. It might be my browser. I have been having trouble on other stable apps this week.  I'll download a couple today and fk  around

It seems to be a problem with my resolution and browser. I was using the edge browser

edit: round 109 because i was stupid and made the system go offline

We just discussed your game on our podcast! Come check us out!

This is nice, but sadly poorly balanced. A lot of the tiles aren't very useful, and the optimal strat is extremely static and ridiculously powerful.

Namely, you want to build a network where hostile packets go through as many turrets as possible, and then use STK.TRASH to get rid of everything except: 1x RSTR.BKP, 2x UPGRD.DEF, 1x STK.TRASH (since you can't get rid of it)

This way, you are guaranteed to be able to restore all turrets from backup every turn, as well as upgrade 4 times per turn on which you do not use RSTR.BKP, or an average of 3 if you do, which with turrets decaying over 3 turns, means you can keep 4-5 tiles upgraded at ALL times - and if they're tiles with 4 turrets on them - nice.

There also seems to be three bugs that I can tell: Lategame(wave 70+), only virus packets spawn, they seem to spawn mostly on the left(unless it spawns more in lanes with more turrets?), and turrets on the rightmost edge of the map do not get repaired by RSTR.BKP.

Ex. typical lategame wave(all in leftmost lane were killed, there is never any in rightmost): 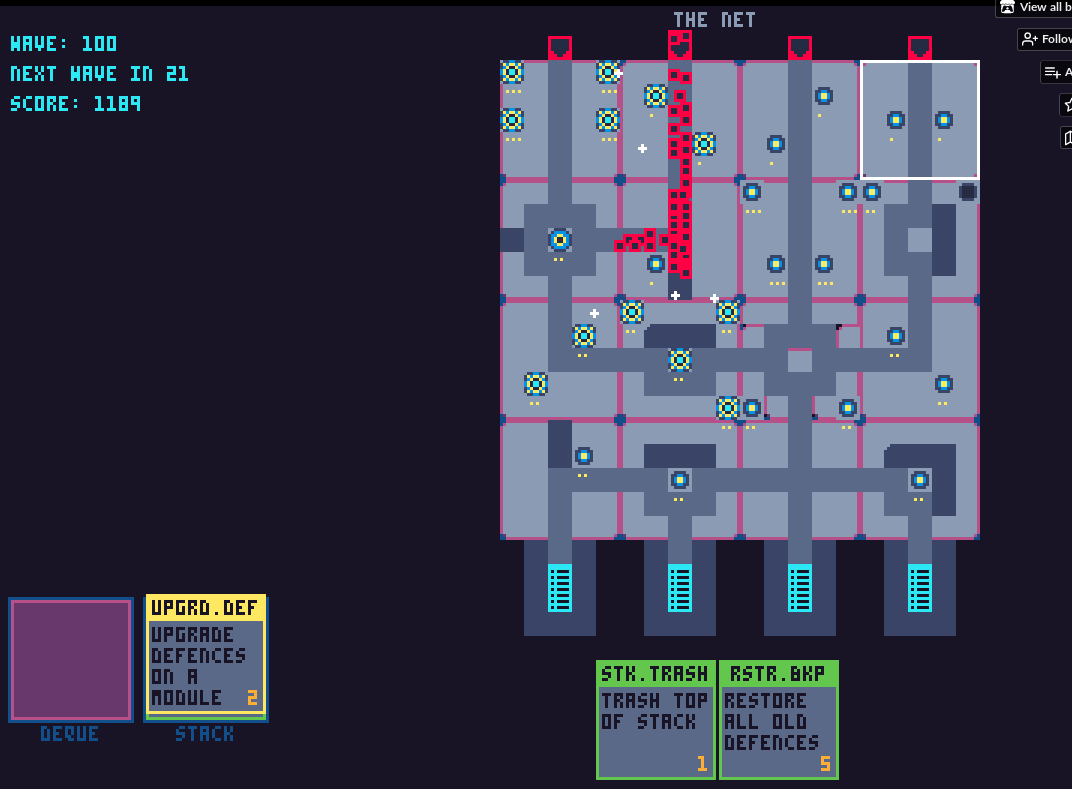 I agree! I liked the idea but it was difficult to balance (especially the economy) and make an interesting strategy.

I'd like to play with the idea more in the future.

Well, the inflow of credits is relatively constant, you could tune it relatively easily, or add sinks. E.g. have repairing consume credits without a "repair all" card, and more limited or niche repair/upgrade cards

After that, to limit frustration, perhaps you could switch turrets over to consuming ammo rather than passively decaying, with some kinda faux system, like... say, each next shot within a wave uses less ammo, so that turrets are unlikely to run out within one wave, and almost guaranteed to run out in a few of shooting at all.

For interactivity, I think it'd be cool if turrets were on turret slots, with the ability to replace individual ones using cards - maybe even add new slots, or give tiles abilities like "pay 1 to switch lane direction", "pay 2 to erect a destructible blockade", that you can add/replace with one-time cards, so you develop your tiles over time(ones that go to stack wouldn't regenerate their turrets, here, I think)

Could also be cool to have a bigger map, since currently horizontal tiles don't have much of an use.

after a while it seemed like I bought all the good stuff from the market (cache) and my deck couldn't improve anymore - that's when I quit playing. would be cool if that was somehow changed. There's also room for ideas like tiles granting an extra flush or card draw per round, which would be cool. Otherwise neat game, fun for the first 50 waves or so.

i cant use the store the game screen is too big for my monitor i can only just about tell what i could buy but i cant see the price or buy anything.

As an avid td-player this feels very original and unique to me. It's a shame it's only one endless mode and not levels or unlocks or any kind of meta progression. I like this a lot but I suppose since it's ludum dare it's a fire and forget kind of thing? I'd love to see some more work on this.