A downloadable game for Windows and Linux

A Wave Synthesis Puzzle Game made for Ludum Dare 39

I recommend the post-compo version as it allows you to adjust the volume.

Connect components to match the waveform to the gate to open it. Use your oscilloscope to view the power waves and see how they differ from how they should look, you’ll need to reroute power through the correct modules in order to open the protected gates and continue.

Mac version is in the works and possibly a web port, although some of the audio techniques used might make it difficult. 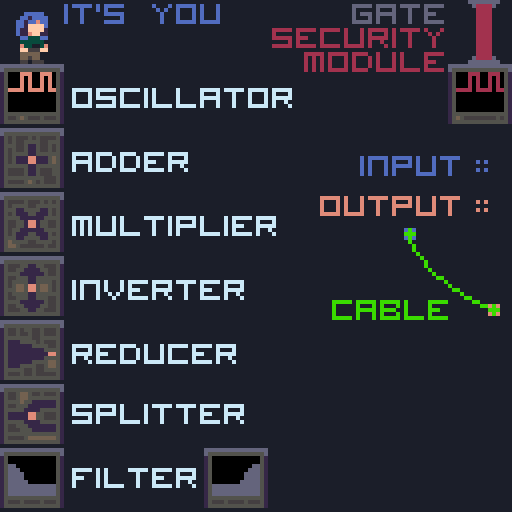 This is absolute genius - I love it!

I share Vospi's Z,X,C confusion, but that's not a crucial thing.

A bigger thing for me is that I wish there was an option to play without the timer - I got stuck on a level and got really frustrated working through earlier levels I didn't remember the solution to.  I guess next time, I'm going to have to go old-school and write the solutions down on paper! :)

I'm currently stuck on the level with three low-pass filters. Anyone have any hints for this?

While it was a very challenging puzzle experience for me, because I'm simply not a really musical person, I admired your game and puzzle design! <3 It's always interesting for me to see with what new idea you come up with for a jam, and this one was certainly something different! Congratulations for the 33rd place in the Ludum Dare 39, by the way. <3 I wrotea little article about that game and also uploaded a short gameplay video of it, may others with a better sense of hearing have more luck than me. :D

darn i have mac

For me, it was rather easy and interesting to try, but there's a couple of things that prevented me from playing it more.

1) I can't stand the fact that this waves are off-tune with the bg music. I had to turn it off, but surely there are ways around that, aren't there? :)

2) I NEED an ability to remap keys, or at least an "hand-alternate" version, where I can move with WASD and act with sometimg else. I can't count how much I stumble trying to alternate between Z, X and C and ended up disconnecting things I didn't want to, going overboard with actions I didn't want to happen. Eventually, I was just tired.

3) It would be nice to have a save state or at least to make timer and sound stop when you minimize the app.

(Let's add FM, LFOs, wave bending and then they'll know how it is to feel their brains inside out :))

Thanks for playing! I'm working on making it a lot easier and explaining how it works a lot more!

Really cool game! your waves are out of sync though, the goal waveform (and the way the waves you have interact) changes as time passes, I was going to add two screenshots I took to show this, but for some reason the add image thing wouldn't load, but if you wait a bit in a level it's easy to see the change. it makes it harder to visualize when your goal is moving. Also, if you plan to keep working on this, it might be a good idea to add the option to see the waves standing still, the movement makes it a bit harder to visualize how they add and multiply, and maybe always have the zero line, to more easily identify when the wave is negative and when it is positive.

It's also cool that this concept allows you to think in two different ways to solve a puzzle, because you can also think about it as the intervals formed to solve it, which is what I did occasionally to bypass the phase desync problem, since the frequencies don't change so you hear the same result, though it's a bit hard, since you can have three waves at octave intervals, and in the result you hear a third, but it's because modulation changes how they relate differently than addition. It might be a good idea to exploit the possibility of solving the puzzles musically, by adding a way to visualize how frequencies interact, or teaching how they interact in terms of intervals, so there's two paths to solve each puzzle, by visualization or by hearing.

Is having a timer a good idea for a puzzle game? It's kind of stressful, specially if the game doesn't tell you what the timer is for, and it made me want to pause the game while I pondered the solution.

Thanks for the great feedback!

I did notice the oscillator drift but I wasn't able to fix it in time for the LD release. Will get that fixed up for the final thing.

I've added in the option to pause the wave display to make comparison a lot easier, as well as stacking waves.

I'll also be adding in a spectrograph to view frequencies.

And the timer will be removed, it was a terrible idea in retrospect.

I like the visuals, the idea.. But damn it KOed my brain big time. :)

Yep that's a known issue. I'm reworking a lot of things to make it a lot easier and introduce concepts more slowly. And give better tools to solve puzzles rather than having to guess.

I'll be making a mac version, I had some issues with building it and didn't have time to fix it before the deadline unfortunately.

Ahh me too. You know porting is allowed post deadline?

Yep, I'll get to it, but had some troubles with dependencies on macos.