Each round you must defeat a number of monsters (indicated by the blue number in the bottom right)
These monsters look like coins, but if you don't collect them quickly they will transform into monsters.
These monsters will become more powerful when you draw a hand of cards and new monsters will spawn.
Once all monsters are defeated, the round ends and you can use collected coins (yellow number in bottom right) to purchase new cards and remove ones you don't want.

Play cards from your hand to attack, dash, move items, draw new cards, buff, heal etc.
Once your hand is empty you will draw another hand of cards automatically, you can also manually draw another hand before using all your cards with Space or Right click

Each card in your deck is linked to an item in your inventory.
If the item is destroyed, the card becomes useless. You can remove unwanted items (and hence their cards) after a round by paying a fee that increases each time you remove an item.

I like it! You should consider having the dash card do damage to enemies if the player runs through them

It was good, maybe it is not too showy but is entertaining, the only i dont like is the game feels slowly, you know, literaly slow, maybe is my potato pc, but i felt like i was moving in slow motion

I absolutely love everything about this, but the teleporting mechanic feels a bit unfair. But who am I to judge, I don't even have any good games made by me.

is the game supposed to have any sound? i hear nothing

No, unfortunately we ran out of time for sound.

I love this game so much. I can't even throw any complaints your way. It's fantastic. I just want to see more!

I love the idea for this game a lot.  In a world where card game Video Games are focused on online multiplayer, and free to play mechanics, I've been wishing for single player TCG RPG's that focus on deck building.  To be honest, I didn't even think about applying rough-lite elements to these kinds of games, but it works given the random nature of card games at times.

However, this game does suffer from many flaws that keep it from being great.

- The thing is, the mechanics of a card game don't work well with real time Action RPG combat.  By the time I decide which card to play, there is already way too many enemies that I can't deal with.  Also, the whole mechanic of enemies getting stronger when you draw more cards is kinda unfair.  The player is not given enough cards in their hand to deal with enemies before they get stronger.  I understand why the mechanic was added, it's to make the player think hard before their actions and adds strategy to the game, but with the real time action combat, the player can't make these kind of decisions when they are dodging enemies and trying not to be dead.  Personally, I would recommend a turn based combat system, because these mechanics would work great and make the game more engaging because with the enemies getting stronger every time they draw, it makes the player strategize their moves carefully, and with the turn based combat, the player will be given as much time as they need to think.

2. Moves that should not be cards.

- Personally, I think the only actions that need cards should be attacks, buffs, and heals.  Pushing and dashing should be normal moves that you have normally.  They take up card space that I only used to empty my hand and get other, better cards.

- I would make it so you can play cards with the mouse, and move with the WASD keys.  The way the keys for the cards are set up are really awkward.

Overall, it's a decent game that can be great if some of the flaws were fixed.  I'm still glad I played it, and I hope to see more great games from you in the future

Thanks for the feedback. Definitely still working on this idea, and a lot of it was rushed for the Jam. We've since had a bunch of ideas on how we can improve the system which we'll try out.

This was mostly an experiment to see if real time combat + card deck building is a viable combination.

Check out "Slay the Spire" for a great turn based combat deckbuilder!

You can play with mouse for selecting cards by the way, though I prefer to play with Arrow keys + Z,X,C,V personally.

WASD and Z,X,C,V would be terrible, you can use H,J,K,L instead.

Your welcome.  All ways looking to give feedback to fellow Indies.

I really like the idea of the game, but I find a few things too frustrating to enjoy higher levels.

- The trash cost increase after every use.

- Enemies attack your items, which are then destroyed and must be trashed (which is too expensive after a few times). Can't even stop them fast enough, because they have too many hitpoints and oftentimes you are too far away (char too slow).

- New items in the buy-phase block me from trashing/buying other items.

- Set the trash cost to a fixed price, based on your deck size (removing an action from a small deck is more expensive than removing it from a large deck).

- Enemies don't attack your stuff unless X (e.g. switching hand cards without having killed an enemy). Destroyed items are auto-repaired during next buy phase. (If this is too easy, change the position of the repaired item to a random tile)

- New items in buy-phase can be walked through. Or: Mouse interaction for trashing/buying.

As of now the game has many moments when bad luck outright destroys a run. Not having any influence over such a major outcome feels too much like a slot machine and less like skill.

It's called encumbered for a reason, you're not suppose to be fast. But yes the trash needs to be fixed and so do the enemies

Good idea! However, the card was so hard to read that I felt dizzy. When I read a new hand, the enemies will grow green and kick me. Anyway, I like this game.

i immediately knew this was from the makers of netcrawler, only thing is i hate using my keyboard, maybe adding some arrows on screen or clicking the squares, idk, or i could get a new wireless keyb oard, but, hmm 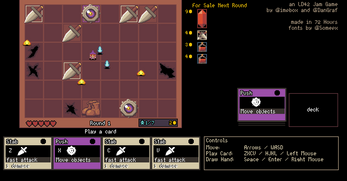